Tu'Tara Caverns (T1)
Salt Barrens (T2)
The Tu'Tara are a reptilian race that appears in Tu'Tara Caverns in Torchlight. The player can attack them without provocation, but they appear to be sentient, as they live in primitive villages. They live in villages built in the caverns and are known for surprising the unwary by leaping out of their huts. The Tu'tara return in the Salt Barrens in Torchlight II.

Notable Weapons that are augmented after killing Tu'Tarans:

The following types of Tu'tara appear in Torchlight: 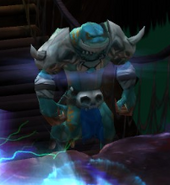 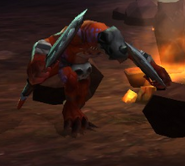 The Tu'tara can be found throughout the Salt Barrens in the Mana Wastes. Their main settlement is Sadwa Mesa, which contains Korari Cave. The cave is the home of Aruk, a Tu'tara boss.

Concept art from Torchlight I
Community content is available under CC-BY-SA unless otherwise noted.
Advertisement