140% Armor
60% Fire Resistance
75% Electric Resistance
75% Ice Resistance
150% Poison Resistance
Spits poison
33% Poison Damage
Spiders are arachnid monsters that infest various dungeons in Torchlight and Torchlight II. They can appear in several forms, from the common ones and their champion forms, to the slightly smaller form (see right); most commonly seen as a pet transformation.

Notable Weapons that are augmented after killing Spiders:

A pet can temporarily be turned into a spider with a Web Fish. Web Fish are a common type of fish that can be caught while fishing just about anywhere. When a Web Fish is used to change your pet into a Spider, it gains no statistical enhancement but gains the web special ability. A pet spider looks a lot like a champion Shadow Recluse, only smaller.

These smaller spiders have the ability to spit poison. Shadow Recluses are considerably different and have a different color in their champion form. Shadow Recluses can be found just about anywhere, as they are one of the most common aids; and also climbing out of sewer grates in the Necropolis.

Shadow Recluse Champions can appear most about anywhere you can find Shadow Recluses. You will find at least two in Orden Mines (Floor 2 and 3), and are often picked as the miniboss to be slain in quests such as Trill-Bot 4000 (the quest-giver). These miniboss spiders should not be taken lightly, as they are very poisonous and are at least twice as big as normal spiders.

Example of a Shadow Recluse champion[]

This spider in particular "Kehelekakar the Deadly" was one of the randomly named miniboss spiders you can expect to fight and slay.

Miniboss spider attacks Brink in the back.

A Character relaxes, while Brink tries to kill the miniboss spider.

Large, tarantula-like spiders that throw immobilizing webs on the ground. These are commonly found in Estherian Ruins and Tu'Tara Caverns.

Tunnel Spider Champions can appear just about anywhere where Tunnel Spiders can be found. The champion is a 100% larger version of the above mentioned spider, which is more powerful and has higher defenses. These mini-bosses can be quite difficult to defeat due to their armor values (hence 200% for these types). Tunnel Spider champions also have the tendency to be aided, by Shadow Recluses as the game progresses to harder levels.

A good way to beat them is by making sure you have several poison resistant trinkets and armor. Keeping an eye on your life-meter while attacking and casting healing spells, or using healing potions; is also a good idea should your health meter drop below half.

Example of a Tunnel Spider Champion[]

This tunnel spider in particular was named "Swordmaster" even though it had no sword. This particular one was found in Estherian Ruins floor 2, accessible through Shadow Vault after Ordrak's defeat. 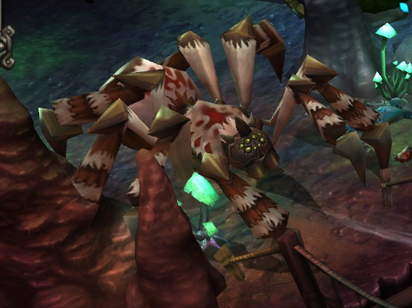 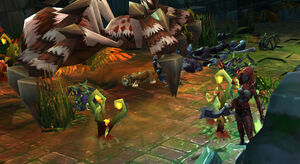