New Game Plus is a game type in Torchlight II that allows players who have completed the main campaign to restart with the same character and face greater challenges. This appears to replace the retirement system in the original Torchlight.

When starting a New Game Plus, the character will retain existing items and skills, but:

New Game Plus is also referred as NG+, with additional plus signs depending on your character.

When you see your person, you can see under the model of the player the status of th New Game Plus.

New Game Plus Plus Plus (NG+++) starts at level 100. This is the maximum level that player can achieve. 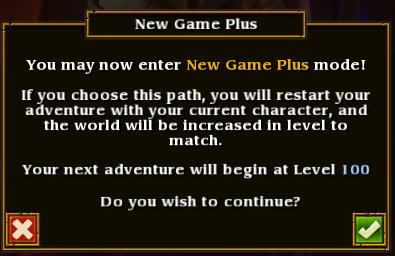 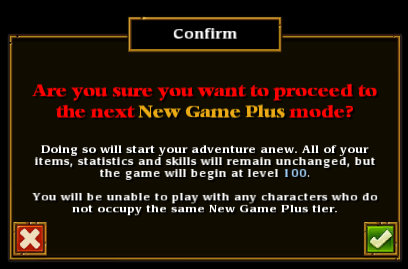 There are also deeper/higher livels after NG+++, one is confirmed to be starting at monster level 120.

Retrieved from "https://torchlight.fandom.com/wiki/New_Game_Plus?oldid=9252"
Community content is available under CC-BY-SA unless otherwise noted.