Prion-Kuru
Netherlord
The Netherim are a group of demonic creatures that appear in Torchlight II. They are invaders from another plane or dimension who enter the world as a result of the Ember corruption spread by the Alchemist: they show a wide variety of forms and tend to have strange power and alien features like tentacles, insectoid limbs and needle-like teeth, but all of them have purple blood.

They first appear in Act I, mutating and taking over Estherians and the Grand Regent in the Frosted Hills.

The Witch is said to be a cultist transformed by the Netherim.

Notable Weapons that are augmented after killing Netherim:

Estherians who have been transformed and have tentacles growing out of their mouths.

These Nether-Thralls have tentacle arms that can attack at longer range.

A large, hulking monster that uses a smash attack.

Casts nether bolts and calls nether slugs from the bodies of fallen cultists.

A Very fast-moving tentacled Netherim that uses a glaive-like weapon. Leap Back. Flees When Allies Perish.

Glaive throwing creatures that slightly resemble the Nethelord. They are slightly larger than players. 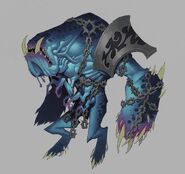