Goblins are a common enemy in Torchlight, Torchlight II, and Torchlight Frontiers. They are small humanoid creatures with varying skin colors and appearances.

In Torchlight goblins had inhabited the ruins of Molten Prison, apparently co-existing with Krag, a giant Troll at the bottom of the prison stronghold.

Additionally, Grave Diggers appear in the Necropolis. They are believed to be goblins, although they do not appear near their brethren.

Although they are not referred to directly as goblins, the pygmies encountered in the Estherian Ruins are named "goblins" in the game's files, and their physical resemblance is obvious. 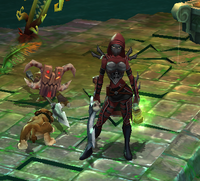 Stabber Pygmy attacking a pet cat with its spear.
Add a photo to this gallery

Retrieved from "https://torchlight.fandom.com/wiki/Goblin?oldid=26003"
Community content is available under CC-BY-SA unless otherwise noted.