The Ezrohir are a Humanoid creature race introduced in Torchlight II. The Ezrohir are an offshoot of the Zeraphi race, immortal beings who have transplanted their minds into Ember-powered mechanical armor. The Ezrohir attack travelers in the Mana Wastes and plot to strike back against their former brethren in the town of Zeryphesh.

Notable Weapons that are augmented after killing Ezrohir: 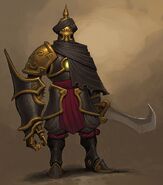 Concept art of an Ezrohir Snatcher 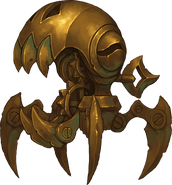 Concept art of a crawler
Add a photo to this gallery

Retrieved from "https://torchlight.fandom.com/wiki/Ezrohir?oldid=27112"
Community content is available under CC-BY-SA unless otherwise noted.