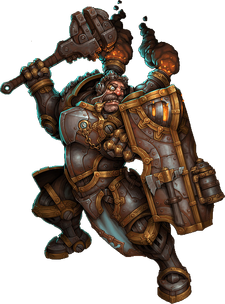 The Engineer is one of the four playable classes in Torchlight II. The Engineer is a heavy melee fighter who can use cannons, battle wrenches and deploy mechanical constructs to aid them in battle.[1]

Engineers are the technological experts of the Empire, and are responsible for constructing and maintaining its Herkonian Embercraft transports. They have come to the continent of Vilderan to help open up the frontier, oversee ember mines, and explore ancient dwarven ruins. As such, they have become honed warriors, taking up massive two-handed spanners as weapons and wearing Ember-powered armor.[1]

The Engineer class was originally named the "Railman" and was envisioned as building railroads across the frontier of Vilderan. The class name was changed in August 2011 after the developers decided not to include railroads in the game environments.

Engineers start with 15 strength, 5 dexterity, 5 focus and 15 vitality. While often considered the tanking class, Engineers can be built to fulfill any role. Forcefield provides excellent durability to tanking builds while letting them rely on robot minions for damage. Engineers can also dish out good damage in melee using Ember Hammer and Flame Hammer, or at range using either Blast Cannon or later Fusillade . Engineers with high Focus can use Fire and Spark to pump their elemental damage in both melee or ranged combat. Finally, Sword and Board Engineers can strike a balance between high damage and high durability, and use the excellent Shield Bash to generate charge quickly. 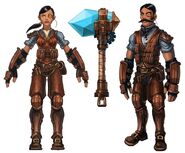 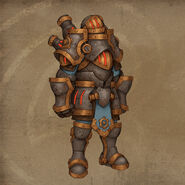 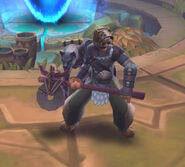 Screenshot
Add a photo to this gallery

Retrieved from "https://torchlight.fandom.com/wiki/Engineer?oldid=26481"
Community content is available under CC-BY-SA unless otherwise noted.