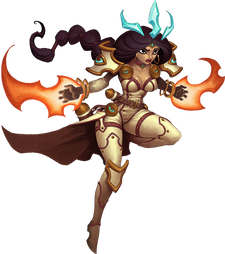 The Embermage is one of the four playable classes in Torchlight II. The spellcasters of the Imperial army, these ranged magic users are masters of the elements, attacking with frost, fire and lightning.[1]

Embermage derives from the word mage which means mana-user or magic-user. "Akasha" was one of the first few people who discovered the true potential of an Embermage's wrath.

The Embermage has three skill trees: Inferno, Frost, and Storm.

Embermages start with 5 strength, 10 dexterity, 15 focus and 10 vitality. As a powerful and destructive spellcaster, the Embermage specializes in steamrolling enemies with a wide array of skills. To maximize damage dealing, more points should be invested into Focus. However, care must be taken to not neglect the mage's survivability. A few points into Vitality will suffice and a negligible amount into Strength and Dexterity. Most mages however are played without relying on physical damage from weapons as their spells dish out plenty of damage, rendering Dexterity and Strength useless in most cases.

Skill wise, there are three trees to choose from.

The Inferno skill tree offers the most damage potential and is effective against armoured enemies as fire damage bypasses their shields. Magma Spear is often levelled as it is a powerful single target demolisher, at all stages of the game. Inferno mages should prioritize on effective crowd control by utilizing both Infernal Collapse and Magma Mace. When these two skills are paired with Firestorm, they unleash a lethal and continuous wave of destruction upon enemies. Be sure to skill up passives such as Fire Brand which adds a powerful kick into every attack on a burning enemy. Charge Mastery is also a must as it helps to conserve mana pools and amplify your damage output.

The Frost skill tree aims to control mobs by restricting their movements and attacks. Icy Blast, Hailstorm and Frost Wave are all effective in ensuring enemies stay put, allowing you to set up powerful area of effect skills such as Infernal Collapse or Thunder Locus. Also, Frost Wave deserves a special mention as the skill scales well into the later stages of the game, providing excellent damage and freeze. The Astral Ally serves as a powerful companion, both being able to tank and launch a fearful blitz of chaos upon enemies. As the Embermage is fragile and squishy, it is advisable to invest points into this skill, having a meat shield absorbing damage for you. Frozen Fate is an overkill chill skill as it further allows the mage to lock enemies in place, which may be unnecessary at times since your other skills already are able to effectively achieve that. Staff Mastery is effective for mages who desire to utilize close-quarters combat and spells in their skirmishes, however this skill also affects Icy Blast, which can then be used to debuffs large groups of enemies. A special mention must be made for Frost Phase as it can be used to position the mage offensively and defensively; either used to escape enemies and dodge projectiles, or to set up for dropping an Area-of-Effect attack.

Finally, the Storm tree completes the triangle of destruction offered by the Embermage. This tree is similar to the Inferno tree, where many skills are devoted to damage, damage and more damage. Prismatic Bolt is hailed as one of the best skills in the game where it excels as a beginner-friendly skill, since it homes onto targets and is very powerful in taking them out. When combined with Elemental Attunement, this skills can act as a wave of mass murder, fully expanding the offensive debuffs that are built in with the bolts. Thunder Locus is an amazing static skill, effective at crowd control and most widely used when kiting bosses. A properly placed Thunder Locus can easily reduce bosses to ashes when they're kited around. Death's Bounty is almost a must for every mage - It reduces the dependency on HP and mana potions, while increasing your survivability by leaps and bounds. Shocking Orb is best combined with Hailstorm as the damage amplification and slows greatly improve the damage output of this skill. Prismatic Rift is a helpful skill at times, pushing enemies aside when they try to attack you.

Fully utilize the synergy of skills, and you will be able to face the horde of enemies fearlessly with the arcane arts by your side! 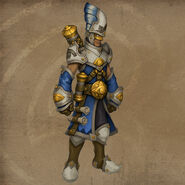 An Embermage, ready for anything,