For a full list of champions in Torchlight II, see Champions (T2).

A Champion monster is a powerful version of a regular enemy, with a unique (randomly-generated) name, much more health than a standard enemy, and special abilities such as teleporting, attacking extra fast, or causing more damage with each attack.

Some people believe champions to be some sort of mini-boss. They are less powerful than full boss monsters, and have a random name that some quests will require you to slain. Champions can be quite a threat, especially as they are always accompanied by a large number of regular enemies. A Champion will still possess any and all abilities of the standard version of the enemy, so a Champion Dragonkin will still be able to breathe fire, and a Champion Chanter Pygmy will still be able to resurrect slain Pygmies.

They are recognizable at a glance, as Champions are enormous compared to their normal brethren, and emit a bright colorful glow. Killing a Champion earns the player significantly more experience than a regular monster, and they almost always drop a handful of enchanted items. Most importantly, each Champion slain adds to a player's legend, granting them bonus Fame. 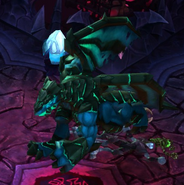