This article is about the Torchlight II class. For the Destroyer's skill tree, see Berserker (skill tree). 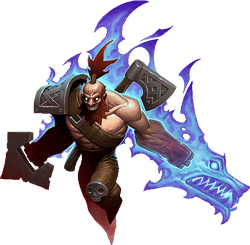 The Berserker is one of the four playable classes in Torchlight II. These savage warriors use ferocious melee attacks, fist weapons, and can summon animal spirits in battle.[1]

Berserkers are wandering warriors who travel the world seeking treasure and battle.

The Berserker was originally intended to use skills themed around three animal spirits. The class description on the official website names three totem animals: Vur, the Wolf; Dralk, the Dragon; and Krax, the Raven.[1] During development, the class was altered to center exclusively around wolf-themed skills.

Berserkers start with 15 strength, 15 dexterity, 5 focus and 5 vitality. Berserkers are considered the high damage class of Torchlight II . They have excellent movement skills, as well as high damage and health regeneration skills. It is most common to dual wield claws while playing this class, but other weapons can also be used to great effect. Shadow Burst is great for high strength melee builds and can be combined with Shadowbind to keep monsters at bay. Executioner functions with both melee and ranged weapons. This and Northern Rage can be used to make an effective pistol build. All builds can benefit from Blood Hunger and Frenzy Mastery because the Berserker's Frenzy is a very powerful ability.

Concept art of a Berserker with a spirit dragon.

Deutsch
Community content is available under CC-BY-SA unless otherwise noted.